I’m so excited! One of my long outstanding research questions has now been answered – but let’s start at the beginning…

Yesterday I went to the Laing Art Gallery in Newcastle, and caught the exhibition “The Enchanted Interior”, which is unfortunately due to end in a couple of weeks. I was especially looking forward to seeing it, as I knew they would be displaying some Pre Raphaelite paintings from our old friends Dante Gabriel Rossetti and William Holman-Hunt, amongst others. You may remember these chaps from The Girl in the Painting, where I fictionalised them and created the wonderfully crazy Daisy to be a laudanum-addicted stalker and wannabe model for her beloved Rossetti, aspiring to be just like none other than his wife, lover, muse and kryptonite, Lizzie Siddal. Today, I saw a sketch and prep work for one of my favourite Waterhouse paintings, The Lady of Shalott, immortalised in The Girl in the Photograph, when Stef takes a photo of Lissy, in just the same sort of pose, and a real Rossetti – close up. Amazing stuff. 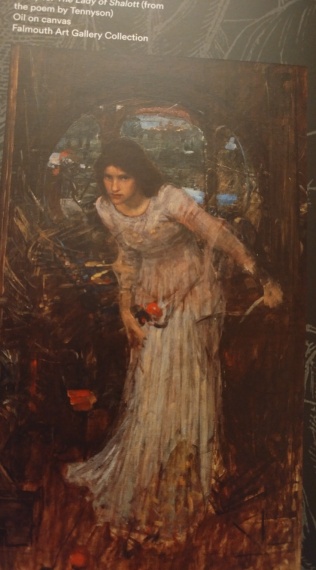 I thought things couldn’t get any better, until I saw an artwork by a lady called Maisie Broadhead called “Shackled” and I was absolutely blown away. It was a photograph of a girl dressed in nineteenth century clothing, literally shackled with a string of pearls around her neck and her wrist; then the pearls actually came out of the artwork, and a real string of them fell to the floor, where they were tied to a lead weight. The girl was, clearly, trapped in her picture-perfect Victorian life and, even worse, trapped as a picture and she could never get away. It was mind-blowing and I could have looked at it for ages. That one reminded me of the storyline for A Secret Rose which was another wonderful link to make.

After all that excitement, I was driving home and I suddenly remembered a story I’d written a couple of years ago based at Belsay Hall in Northumberland. It was a very short timeslip story, and the basis if it was an exhibition there in 2007, called The Picture House Exhibition. The installation I absolutely loved was by Geraldine Pilgrim, and called “Dreams of a Winter Night”. It was based on the coming out ball of Kitty Middleton, and signified her hopes and dreams, and also the feeling of being trapped and stifled in a Society which was full of expectation.

For twelve years, Kitty has sort of haunted me. I even borrowed her name for a character’s daughter in Watch for me by Moonlight. And throughout all that time, I kept wondering what the real Kitty was like; when the ball was; what era were we talking about and all of that. And I didn’t know until today. I’m pleased to say I’ve tracked her down – Katharine Elinor Middleton was born in 1907, in Southsea, London, into the Monck family who had the Baronetcy of Belsay Hall. Kitty was 16 in 1924 when her ball was hosted – which made me wonder if she was a bit of a flapper or a lot more decorous!

My opinion now is that I think Kitty was a bit of a rebel – my jaw dropped when I read the news article I found about her, and delved even further based on the information I found there: Kitty left her privileged upbringing to become a member of the French Resistance, and died in Paris in 1947. So in some ways, Kitty broke out of that Belsay bubble and found her freedom in a way I never even considered. I thought she might have married and had a few children and lived a sensible life on the edge of nobility.

I was wrong. She never married and her fortune of around £165,000 of today’s money was split between her two younger brothers. But I think this version of Kitty is so much better in some ways; so much more what I think she wanted to do. And for that, we have to applaud her. Well done Kitty Middleton, you very brave lady.

For more information and pictures on the 2007 exhibition, this is the link to Geraldine Pilgrim’s website.

And this is the link to an article about Kitty and the rest of the exhibition.